Parkduff Cottage and the 4 Ones

We left County Clare and Parkduff Cottage this morning with mixed emotions. On one hand, the house was dusty & cobwebby and had only the minimum of necessities (like forks). On the other hand, it was by the sea. Clare and Andrew liked the house better than Clare and I did. They liked the cottagey feel of it.

Along the route -- this may be Yeates country

The drive to Feeny & Drumcovitt House was long and tiring. The countryside, though beautiful, was not a lot different than what we’d seen before — cows, trees, pastures, dry stone walls, sheep, and occasionaly mountains.

We stopped for lunch at a small town on the way and rested from the ride so far and for the ride ahead. Our GPS was set for the next accomodation and we finally arrived at 5:00 pm. There was really no indication that we were entering another country when we crossed the border into Northern Ireland. What difference peace and a few years makes!

Drumcovitt House itself is a lovely manor house with a round tower. It is over 300 years old and until a couple of years ago was a bed and breakfast. Now the young Sloan family lives in the house, and only the barn rooms are available for rent.

When we got to the house we were all ready for a nice rest, then dinner. I rang the doorbell of the office and was greeted by dogs barking. I tried again, but no luck. The owners knew we were coming and said everything would be in order, so I couldn’t figure out what went wrong. Dean was unhappy about this turn off events. 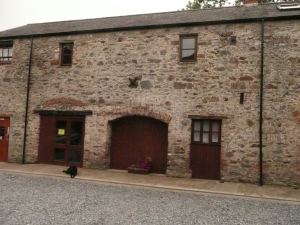 Clare was the one to notice a wet envelope on the pavement about two yards from the office door. She picked it up and saw that it had a name on it. She realized it was for us and opened the envelope. Inside was a note from Sarah, the proprietor, apologizing for not being there — they were celebrating their son’s birthday away from the house– and telling us to make ourselves at home.

We walked around the barn and tried the doorknob of Roe Loft. It didn’t budge. I re-read the note and saw that Sarah mentioned a key she was going to put into the envelope. I looked in the envelope, but it wasn’t there. We went back around the barn to see if perhaps the key had fallen out. Clare did it. I did it. Dean did it and I think Andrew also looked. No key. Door locked. No one home.

I then noticed that Sarah had given me her cell number, so I made my first cell call in Ireland with my Sidekick (that I’d set up to use to make calls overseas). Sarah answered right away and after I introduced myself she said, in a sticken voice, “I forgot to leave the key!” She then apologized and said she’d have someone come around straight away to open the door for us.

A few minutes later a young woman in a car tore up the driveway, let herself in the house, then came out and unlocked Roe Loft for us.

The house is lovely. The kids especially liked the cable television — lots of channels. We unpacked and settled in. Dean and I went to town and bought some food for dinner.

Clare, Andrew and I went on a tour of the grounds. This is a working farm with sheep and cattle. We walked along the fairy trail, hoping to spot some fairies. While we didn’t see any fairies, Clare saw what she thought was the rump of a goat walking over a small bridge. We later discovered it was probably a badger. 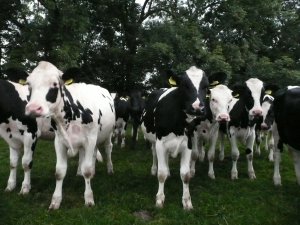 We stood in the middle of the field. The sheep were curious, but then ran away. The cows just kept on coming closer and closer — and even licked our raincoats. We think they liked the salt from our Skellig adventure.

The kids are watching television and Dean has gone to bed. I’m writing this from the bed that Clare and I are sharing. (this cottage only has two bedrooms so the girls are sharing a bed and the guys get the twin bedroom).

Because tomorrow is forcast to be sunny, we think we’re going to drive along the Antrim coast.